The Story of the Cusack Home, Back on the Market 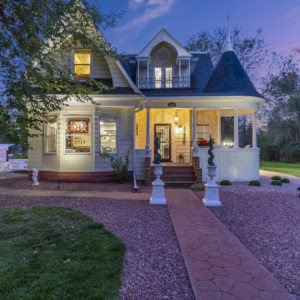 The beautiful Queen Anne-style home that houses Drohman’s Salon & Day Spa at 3922 Cleveland Ave is for sale. Here is the home’s story.

John Cusack managed the First National Bank of Wellington in 1905, purchased the large lot three blocks east of the bank at 3922 Cleveland Ave, and began developing the property in 1906, adding outbuildings and the beautiful Victorian home that still stands today. The First National Bank of Wellington was thriving, as was John’s reputation in the community. Within a year of arriving in town, the Wellington Board of Trustees voted to have John serve as Town Treasurer. He married Mary ‘Aldah’ Wilson this same year, and they moved into their new home upon return from the honeymoon. John served as Mayor of Wellington from 1907-1908 and was involved with the local Masons, Odd Fellows, and Elks clubs. Aldah gave birth to a healthy baby boy in 1909. By the end of 1910, the bank reported $169,882 in financial resources.

By August of 1911, the tune changed, and John sold his shares in the bank, and the home and property, to Samuel Clammer, the former Mayor of Fort Collins. The Cusack family moved to a ranch near Saratoga, Wyoming, in December.

In the May 31st, 1912 edition of Fort Collins’s The Weekly Courier, the first headline reads “Former Cashier Wellington Bank Under Arrest.” John was arrested by a US Marshal in Wyoming, charged with embezzlement of bank funds from the First National Bank of Wellington, for a crime committed in June of 1911 with two other unnamed individuals. Accused of issuing loans for a phony irrigation company project in Weld County, he was transported to Denver to await trial. The article reports that John’s father traveled from Nebraska to Wellington to re-pay his son’s debt, which was between $25,000-$35,000, and then sold the bank in part payment for a Wyoming ranch.

Another highly regarded member of the Wellington community, Francis Grable, founder of the North Poudre Irrigation Company, prior bank president, and prominent developer and promoter, was charged with assisting in the scheme. A federal grand jury in Pueblo, investigating the charges, issued an indictment against Cusack and Grable in November of 1912. In December of 1915, the case, held at the US District Court in Denver, finally went to trial. Cusack was charged with thirty counts of embezzlement, misapplication of funds, and fraudulent bank entries. During the hearing, Cusack claimed innocence, blaming Grable for the fraud. After the hearing, the jury returned with a verdict of ‘not guilty on all charges.’ Grable’s charges were also dropped due to a lack of sufficient evidence, and the truth remains a mystery.

Meanwhile, John’s wife, Aldah, permanently moved to California with their son in August of 1914. She never remarried and claimed to be ‘widowed,’ even though John was still alive. John had gained employment with a livestock company in Colorado and remarried.

The property changed hands numerous times between 1911 and 1945, with short-term inhabitants and renters. In 1945, Darrell and Faye Poulter purchased the home, and in the 1950s, the couple converted the house into a restaurant called Twin Spruce Inn. They made improvements, including adding the detached garage. They sold the home in 1958 and inscribed their names on the bottom of the newel post cap on the main entry stairway, where it remains and where many more owners would sign their names. The home changed hands many more times, including being owned again by a Mayor of Wellington, Charles Blakeley, who did more work on the property during the decade he owned it. It changed owners a few more times before being purchased by Illa and Acey Drohman in 2004.

Illa has been woven into the fabric of Wellington since 1986 when she opened her salon, Drohman’s Custom Cutters, in the building where Cantina Liquors is now. After purchasing the Cusack home in 2004, the Drohman’s converted the main floor into Drohman’s Salon and Day Spa. They made many improvements to the grounds and houses, like adding the gazebo, flagpole, and vinyl fencing.

Interestingly, this house has an identical twin, located at 1302 N. Washington St. in Lexington, Nebraska. It was believed to be a Sears Roebuck Company mail-order house. However, this company did not begin selling mail-order houses until 1908, and these houses pre-date that (1900 and 1906). Other mail-order home companies were ruled out, but it is possible that both homes were plan books or catalog homes. John Cusack came from North Bend, Nebraska, traveled through Lexington along the mainline of the Union Pacific Railroad, and may have seen the twin house. This also remains a mystery.

A historical survey was completed on the home in 2017 by Tatanka Historical Associates Inc. It is eligible for historic registry due to being an excellent example of the Queen Anne style home applied to a small farming town setting. The above information came from the survey found at https://wellingtonmainstreet.org/resources.

To see the property listing for this home, visit: https://www.iresis.com/cwa/link/listing?llid=496vlc1qh0f&lid=1252625