The ‘Global War on Terror Wall of Remembrance’ Comes to Town 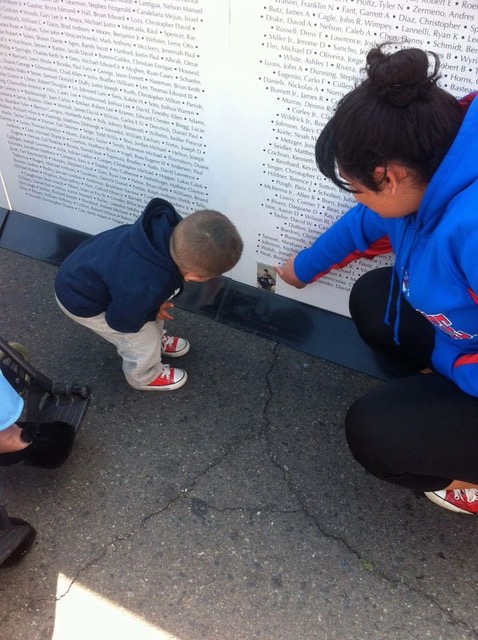 Jenny and David Brown moved to Wellington, CO, six years ago. On their first Veterans Day in town, they found themselves at Old Colorado Brewing Company. They had laid to rest a friend, Russell, just before their move, so they ordered him a beer, sitting in front of an empty chair. Brandon Neckel, the owner of Old Colorado, was bartending that night and asked about the extra beer. They shared Russell’s story and also talked about the Memorial Wall they built, in 2011.

The Browns visited Old Colorado Brewing Co’s new location on September 11 of this year for a minute of silence. The crew there was busy planning for an epic Veterans Day Celebration. Brandon, recognizing the couple, approached them and said, “you had the Wall!” Conversations ensued, and in a whirlwind of logistics figuring, the GWOT Wall of Remembrance would come to Wellington for Veterans Day.

The Browns lived in Garden Grove, California, at the time of the Wall’s inception. The community had a weekly flag ceremony honoring veterans in Orange Plaza. That is where they met Richard ‘JR’ Nichols, who ran a nonprofit called Vision2Victory. In addition to being a USMC veteran, David worked for a graphic design company. JR and David put their heads together and came up with an idea for the ‘Global War on Terror Wall of Remembrance.’ It would have a timeline on one side, sharing a visual history lesson on the activities in the war on terror. The other side would have a complete listing of lives lost since 1983’s bombing of the Marine Barracks in Lebanon, including those lost in the September 11 attacks. They created it for a one-time event, the tenth anniversary of September 11 in 2011. The response to the Wall was overwhelming, with the creators asked to turn it into a traveling Wall.

The original Wall did travel, thanks to the support of Marine Derek Hendershot and a trailer. It was on display between 2011 and 2016 in at least seventy-five locations around the United States, from presidential libraries to the Marine Corps National Museum. Unfortunately, the original Wall didn’t stand up well to wind and weather. So in 2017, a new Wall was built using better quality materials and design. Around this time, Derek could no longer care for the traveling Wall. They handed the new Wall over to Brian Roman with the Romans Warrior Foundation, who would continue the travels.

Unfortunately, the Browns lost touch with the Walls in their move to Colorado. However, they recently learned the original Wall might be in a barn in Oklahoma City, and they are working on getting it back in the right hands. This event has reconnected them with Brian and the second Wall.

Brian Roman is bringing the Wall from Indiana to Colorado via a route that is 2200 miles long. That mileage purposefully planned to acknowledge the 22 Veteran lives lost a day to suicide. Brian, a Marine, started the Romans Warrior Foundation in Indiana after a near-death motorcycle accident in October 2016. He took this second chance as an opportunity to begin helping his fellow Veterans, First Responders, and their families. In addition to caring for the Wall, he facilitates the Stop22 Tour.

The Wall will first visit Scheels in Johnstown for viewing from November 5 through November 9. David, who works at Scheels, is printing new panels to include the names of lives lost on August 26, 2021, at the Kabul airport attack. The historical also receives updates. The Wall, consisting of 3′ x 6′ panels, was 90ft long and will be 110ft long with the addition of the new panels. If they added the veteran deaths by suicide, it would be 37 more panels. The Wall travels to Wellington on November 10 and will stay until November 14. A caravan will help transport the Wall to and from both locations.

Those who have lost loved ones in the military, known as ‘Gold Star Families’, are invited to help set up panels containing familiar names. The Wall is open for viewing 24/7 in both locations. There will be volunteers present the entire time who can help locate names, answer questions, and provide security. Each day will start with the Pledge of Allegiance and raising the flag and finish with the National Song of Remembrance Taps and lowering of the flag. Additional events planned in Wellington include F-16 flyovers, a chili cookoff, and Marine’s birthday celebration.

The Wall includes approximately 10,000 names representing losses from September 11 and conflicts in Iraq and Afghanistan spanning from 1983 to the present, including terrorist acts. Not included on the Wall are losses by suicide. Veteran suicides weren’t talked about much in 2011 and are still not well-tracked. The Browns are doing their research as they plan to add deaths by suicide to the next generation Wall. At present count, they found 30,177 veteran lives lost to suicide during this period. That is a staggering number, speaking volumes to the need for creating community around supporting Veterans.

Around 70% of those 30,177 suicide deaths were veterans from the Vietnam era. Most Vietnam veterans served a year, came home, raised their families, and then retired. Boredom, untreated mental health issues, and loss of community post retiring did them in. The veterans coming home now served 7-12 years and aren’t leaving Afghanistan because it is in ‘good condition.’ This is a grievous burden to carry, similar to the burden Vietnam veterans carried when they were spat at — upon their return home. The need for support will be lifelong.

This ‘Global War on Terrorism Remembrance Wall of Remembrance’ allows for learning, remembering, and acknowledging the reality of the War on Terrorism. Brian Roman’s kids are quick to grab the attention of visiting youth so that they can teach them about the Wall, a topic not often taught in school. Those visiting familiar names have an opportunity to talk with a veteran volunteer ready to listen. It is not uncommon to find visitors late at night, seeking privacy during their time with the Wall.

“We are excited for people to see it. It is a unique experience. Not a happy one, but a humbling one,” share the Browns. “Our heart is with this wall, and we are beside ourselves with excitement about getting it here and getting involved again.” The Browns have family and friends’ names on the Wall.

The Romans Warrior Foundation partnered with local nonprofit Qualified Listeners in support and funding for bringing the Wall to Colorado. Qualified Listeners helps Veterans and their families find more peace in life by listening, advocating, connecting with resources, and providing outreach. They serve both Colorado and Wyoming. Both organizations will receive 50% of the donations made throughout the event. Funds raised will help support the missions of these organizations and create future opportunities for the Wall.

Old Colorado Brewing Company, The BBQ Love Shack, and American Legion Wellington Post 176 are coordinating efforts on the Wellington side. Reach out to any of them to learn how you can volunteer or donate to this cause. Facebook users can follow ‘Wellington Veterans Day Celebration’ for up-to-date event details. Folks are encouraged to join in with flags in welcoming the caravan in town on November 10, after it departs from Johnstown at 10 am. The opening ceremony is at 1 pm.

“This is a Memorial of Healing that has truly saved lives hanging on the brink of tragedy, often battling a war unseen to many. The magnitude and impact knowing our brothers and sisters are not forgotten is an emotionally charged experience that is indescribable by mere words and must truly be felt,” stated Romans Warrior Foundation. With the Wall being in Northern Colorado for ten days, there are plenty of opportunities to experience it.

To reach out regarding the Wall, visit https://www.romanswarriorfoundation.org.

For Veteran resources in the community, visit Qualified Listeners at https://qualifiedlisteners.org or call 720-600-0860.

Article Published in North Forty News, November 6, 2021. Was also on the front cover of the newspaper.