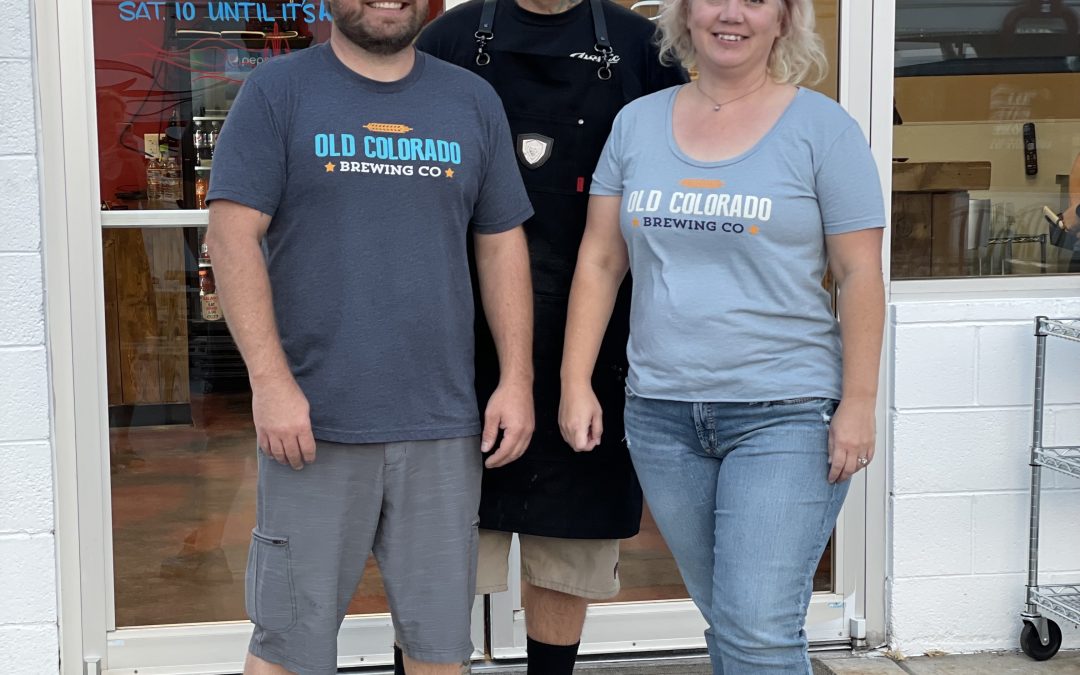 The west entrance of Wellington’s historic downtown was an eyesore for a decade, plagued by an abandoned gas station stuck in the ’90s. However, that corner has rapidly transformed over the past year and is now a lively place to find craft beer and genuine Texas BBQ.

Brandon and Tara Neckel opened the first brewery in Wellington in February 2016 in an old grain elevator. Old Colorado Brewing Company had another first when it was opened by Brandon’s grandfather, Joe Neckel, in 1989. From its downtown Fort Collins location, it became the first microbrewery in Northern Colorado and third state-wide. It operated until 2002 when grandpa Joe retired.

“I was the only person in the family to get grandpa’s recipes,” shared Brandon, who was 18 when the Fort Collins brewery closed. Brandon wasn’t sure what he would do with the recipes until he met his wife, Tara. Tara’s background in business got the ideas rolling. She returned to school, picking up an MBA in 2014, to best take care of the operations and business side of brewery ownership. Brandon received his grandfather’s recipes in 2013, learned how to be a brewer, and mastered the social butterfly side of things. In 2016, after a 14-year dry spell, Old Colorado Brewing Company’s taps opened. The Neckel’s carried on a family tradition that started with great great grandfather Michael Neckel, and Michigan State Brewing Company, before prohibition in the early 1900s. “We knew we could do this well and help people out along the way,” shares Tara.

Old Colorado Brewing Company thrived in the old grain elevator building along 1st street until they lost their lease in December 2019. “We tried to bring something to Wellington so that people would stay here and be comfortable in their community,” shares Brandon. They had an integral role in starting Wellington Brewfest, the 0.5K Fun Run, and Cheers for Charity. While the closure timing turned into a blessing with the incoming pandemic, the couple continued looking for a perfect next location for the brewery.

Rob Wynne owns Smokin Hot BBQ, a Wellington-based business that builds and rents custom smokers, caters events and sells smoking wood. Rob had a great idea to open a BBQ destination in Wellington. He elicited the help of Adam Lucier, owner of Atomic Cycle Coatings, a motorcycle custom paint, damage repair, and powder coating business next door to Smoking Hot BBQ. Rob and Adam had been friends for over a decade, meeting through a shared workspace. Adam loved backyard BBQ, and Rob had a trailer in which he traveled around the US participating in BBQ competitions.

Rob and Adam came up with the idea for BBQ Love Shack in April 2021. They planned a trip to the Texas BBQ tour and fell in love with Texas BBQ. “We had a vision of creating a destination place in Colorado, similar to what it looks like in Texas,” shares Adam. “Weekend’s only, long lines, and available until it sells out because it takes days to prepare.” Texas BBQ is savory, unlike the Kansas City BBQ’s ‘sweet.’ It is salt and pepper-based, and you don’t have to add sauce. Rob and Adam weren’t looking to open a BBQ fast food place; they wanted to bring quality BBQ that causes you to sit for a while, enjoy the ambiance and people, and return the following weekend for another round.

They needed beer to go with the BBQ. Having been neighbors with Old Colorado Brewing company’s previous location, it was a no-brainer who the perfect brewery for the partnership would be. The Neckel’s, of course, said ‘yes.’ After much planning and renovating, the team opened doors in late July, and Wellington got its first taste of local Texas BBQ.

The BBQ Love Shack is now open Saturdays and Sundays and Tuesday and Thursday nights. Old Colorado Brewing Company is available every day of the week and has food trucks when BBQ isn’t happening. Check out both organizations’ websites and social media sites to find the latest schedule, events, and menus.

Old Colorado doesn’t have as many taps at the new location but expect to find grandpa Joe’s recipes and seasonal twists. Also, expect to see many familiar faces behind the counter, as much of the prior staff jumped at the opportunity to be a part of Old Colorado’s next chapter.

The team hosts a tailgate party every Sunday, with three big screens (one outdoors) showing different games. They are the only NFL ticket location business in Wellington. There is live music on the weekends and events happening during the week. In addition, they are teaming up with others to host the most prominent Veteran’s Day celebration Wellington has ever seen.

When you visit the BBQ Love Shack and Old Colorado Brewing Company, expect welcoming faces genuinely happy to see you, ready to serve a beer or talk about bbq. The signs and smells of bbq smokers and sights of people enjoying a sunny afternoon make it easy to forget the corner that once housed an old vacant gas station.