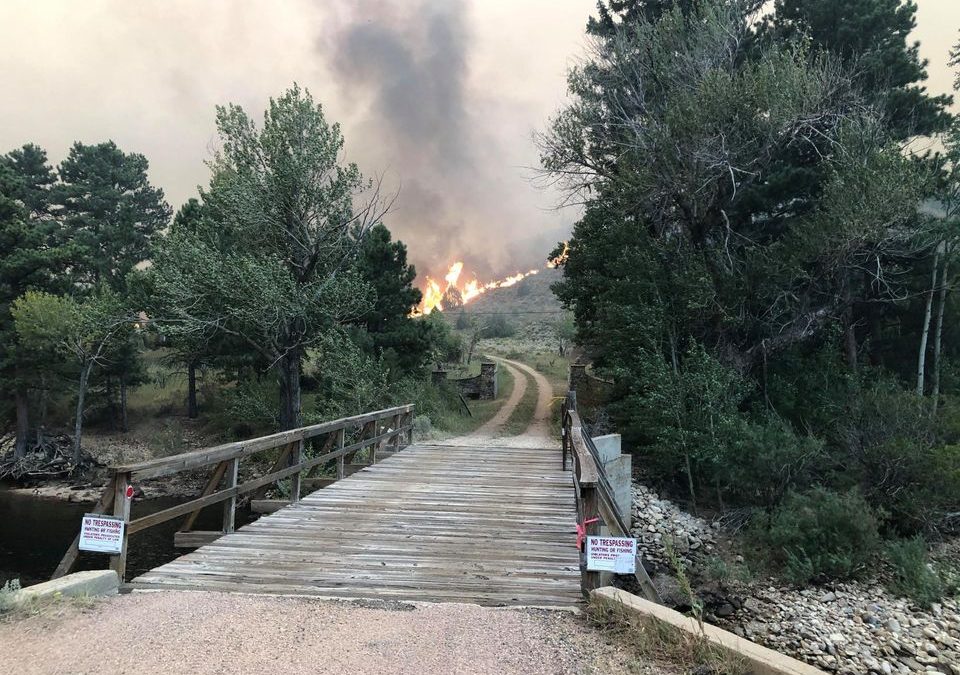 Fires can wreak havoc in so many ways. For those with homes in the path of the fire, it is incredibly stressful times. Some of these properties play an essential role in telling the story of the area’s history. All are important to those who call them ‘home.’ Poudre Canyon’s history suffered losses as the Cameron Peak fire raged on September 7, 2020.

‘Pinehurst’ was homesteaded in 1885 by John D. Cooper. It changed hands a few times under the original name of ‘Sheep Gulch Ranch’ before it was purchased in 1895 by A.W. Scott, a prominent Fort Collins businessman. A.W. Scott was Sue Schneider’s great-great-uncle. The property has remained in Sue’s family, serving as the venue for social gatherings, holidays, summer getaways, and ‘home.’ Memories made for so many throughout the past century are all that remains from the beautiful home and outbuildings that adorned the property near Rustic in Poudre Canyon.

As we watched the Cameron Peak Fire news, we knew it could grow and threaten our property within days. My husband and I were living at Pinehurst in 2012 during the High Park Fire, and we knew how quickly fires could spread. The weather had been fiercely hot and dry. Sheep Creek had dried up for the first time since 2012. We kept a close watch on the fire maps, tuned in for the daily updates on Facebook, and joined in the virtual meetings. They kept referencing “structure protections,” and we had confidence they’d do what they could to protect our property.

As the fire grew, we made a trip up and gathered some of the sentimental items. As it got closer, my husband and I made another trip up, gathered more things, and talked to some folks at the fire station who assured us they would use their equipment, sprinklers, and “pumpkin water tanks” if it came to that. At that point, they didn’t seem too concerned about it reaching our place.

However, as we all know, conditions worsened, and the fire headed our way. We watched an emotional Sheriff Smith give an update at a news conference on Monday the 7th, and he mentioned having just been up the Canyon and that he had some pictures. He said no structures were lost, but there were some in “imminent” danger.

At 5:00, we watched Channel 9 news, and a picture appeared of Archer’s and huge flames behind it; flames that were from our property. That was gut-wrenching enough, but later that evening, a photo taken by Sheriff Smith appeared on Larimer County Sheriff’s Office Facebook page. A photo was taken from Highway 14, across our bridge, of flames bearing towards the river. Our beloved Pinehurst was just around the bend from those pictures. We, and many others who recognized that bridge, were stunned. This was how we found out the property that had been in our family for over 120 years was probably gone. We held out hope that somehow it survived.

To date (Wednesday the 9th), we still have received no official word, but volunteers from the local fire department made a trip up the driveway and verified that the house and all the outbuildings have burned to the ground. There is still no visual verification about Twin Pines, but miraculously Fairkytes was spared and still stands. I’ve heard secondhand that there were crews at our place, but the fire was too fierce and hot, and they had to retreat. There was only one way in and one way out, so this makes sense. We’d love to talk to the firefighters involved to understand the situation, but we have still not gotten any word from the Sheriff’s office about our structure.

Sue references two other historic properties in her story of the incident, ‘Twin Pines’ and ‘Fairkytes,’ both built by Norman Fry. She has not yet received official word but heard secondhand that Twin Pines was also lost.

Norman Fry migrated from England in 1889, at the age of 17, and played an essential role in the development of Poudre Canyon until he died in 1954. A farmer, a hard and resourceful worker, and a notorious entertainer, his accomplishments and contributions are laced throughout Poudre Canyon’s history. Norman lived at Pinehurst (Sue’s family home) when he first arrived in the country. He later purchased nearby land for farming and built ‘Twin Pines’ in 1899. In 1919 he built ‘Fairkytes’ on a corner of his land near the river, which served as his retirement home. Fairkytes may be all that remains.

There is a wonderful video on the history of Norman Fry and the properties referenced above, on the Historic Larimer County’s Website and Facebook page. The story, told by Sue Schneider and Sandra Lundt, includes photos and life stories of Poudre Canyon.

The Cameron Peak fire, which grew to over 100,000acres over Labor Day weekend, raced eastward towards the more populated areas of Larimer County. Many faced evacuated until the snow and moisture moved in Tuesday and Wednesday, calming the fire’s rapid growth. Firefighters are hard at work trying to get the fire contained and protecting structures from destruction. As the battle between humans and nature continues, let us share the hope that no more relics of Larimer County’s history go down in flames.