My Story, of Being a Vegetarian 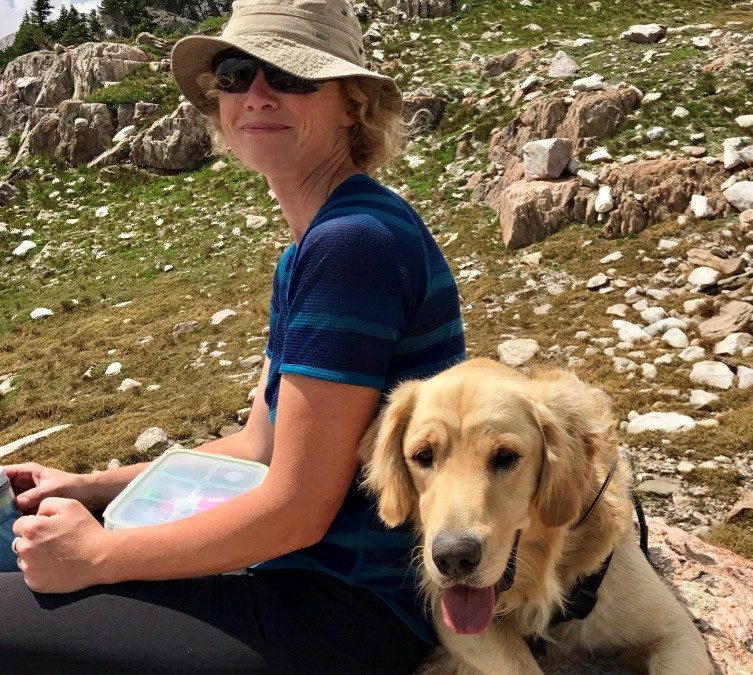 I quit eating meat in 2003, and have since received a lot of questions like ‘Why did you quit eating meat?’ and ‘How do you get protein?’ Friends and loved ones like to give me a hard time, but for me ‘not eating meat’ is just a part of my life. Let me share my story of how I became a vegetarian, and how that has evolved to my current diet, as a dairy free vegetarian who sometimes eats fish.

A combination of working in the restaurant business and having a dad who was a terrible cook, led me to not really liking meat, a symptom that got worse in my late teens. I thought I needed it, so I kept eating it, but often chose meat that didn’t look like meat (hot dogs, sandwich meat, gyro meat, hamburger, ect). When I was 20yrs old, I took a college course on Human Nutrition, and learned that I didn’t actually need meat in order to get enough protein, so by my 21st birthday, I was done with meat. I did have a cheat day a few months later, when I was camping in Colorado, and wanted one last campfire cooked burnt hotdog. I was working in the restaurant business at the time, and concerned friends decided to feed me shrimp whenever able. I had never been a fan of seafood, but liked shrimp, and agreed to eat it, until one time I got a hold of some shrimp that was a bit raw and included the visible intestine vein, and that was the end of it for me.

My decision to stop eating meat, coincided with my father’s battle with cancer. My father had not been a healthy eater later in life, and weighed over 350lbs when he was diagnosed with cancer, which would spread throughout his body, and leave him closer to 160lbs when he died three years later. It made me wonder how his diet may have impacted his health, and made me more aware of what I was putting in my body, and how that may have been impacting my health. I read the book Omnivores Dilemma by Michael Pollan, which was eye opening in how animals were treated and cared for, how food quality diminishes with mass production, and the chemicals used (and found in) in both animals and plants. I had always been an animal lover, and felt a special connection with animals. Part of my aversion to eating meat, was due to not seeing much difference between the meat found inside my own body, and the meat found inside of a cow, deer, or pig’s body. It all looked the same. To learn that animals did not have a good life when they were raised for mass meat production, made that aversion even stronger.

I didn’t miss eating meat, and I continued learning more about balanced nutrition, food quality, and what was actually in the food we eat. My diet changed considerably as I cut out artificial foods and anything that could contain chemicals. I moved towards a more whole foods and organic food diet, learning what foods needed to be organic, and what ones were probably safe. Vegetables raised covered in pesticides, insecticides, and fertilizers, were not as good for me as foods raised organically. I enjoyed gardening, and growing my own vegetables, knowing exactly how they were cared for. I cut out foods with artificial colors, high fructose corn syrup, and hydrogenated oils, and I cut down on my sugar and white flour intake. I ate a lot of vegetables and fruits, and chose whole grains and rice, over pasta and heavily processed flours.

While I had loved milk as a kid, I grew up drinking skim milk, and after learning about what chemicals could be found in non organic milk, I switched to soy milk, and then to almond milk. I loved cheese, ice cream, and yoghurt, and thought I could never give up dairy. I even made my own dairy products, using raw milk from a friend who had dairy cows, and I was raising Nigerian Dwarf goats, so that I could make goat cheese. As I got older, in to my 30’s, I started having issues when consuming dairy, just gassy at first, but as time progressed I noticed that I would also get stuffy and bloated, and have sinus headaches. I would feel nauseous, have stomach aches, and intestinal issues. I grew to have an aversion to consuming dairy, and realized I would have to give it up. I was 36 when I finally made the call, and I do carry dairy enzymes/Lactase with me for those moments that I have no choice or just can’t resist, but even that doesn’t keep me from side effects. Not being able to eat dairy has made it much more challenging for me to find foods I can eat when traveling, when at parties, or while attending work related events.

I eat eggs, and when I had a farm, I raised my own chickens, so I had a steady supply of healthy farm fresh eggs. Now that I no longer own a farm, I don’t eat eggs as much, because store bought eggs don’t taste the same. I am lucky to have friends with chickens, so am still able to get the good stuff.

I have never been a huge fan of eating out at restaurants, and stopped doing fast food restaurants in my early 20’s. It might have been the decade that I spent working in the restaurant business. It may also be my preference for knowing exactly what is in the food that I eat, and for not paying big bucks for something that I could make at home just as tastily and much more cheaply. I love to cook and bake, and so I prepare my own meals, bringing lunch with me to work. Preparing all my own meals assures that I get a proper balanced diet. My son was not vegetarian, and I provided him with quick easy meat options that he could prepare on his own (or that didn’t require me cooking raw meat). He would eat meat if we ate out, or if he was with friends or family who ate meat. Typically though, he ate a lot of the same foods I ate. Starting him early with eating this way, led to him preferring it as he got older. He got excited about tofu, and enjoyed the plant based meat free ‘faux meat’ alternatives. He grew to dislike meat that looked like animal, and since we never ate out at fast food restaurants, he never asked for it.

My current diet is clean and balanced, though I have my guilty pleasures and my tools for making easy protein rich meals. I often do a vegan protein shake for breakfast, so I know I kick off right. I eat a lot of vegetables, fruits, nuts, and beans. I have found many dairy free and meat free, yoghurt, cheese, and ‘faux meat’ alternatives, that are protein rich, tasty, and easy. In the summer time, when I am extra busy with adventure, and getting lots of exercise, I tend to lean towards fast and easy, while in the winter, when I have more time to spend in the kitchen, I get creative with stir fries and Italian theme dishes.

Around the time that I had to give up dairy, I started growing interested in seafood and fish. Growing up in a landlocked midwestern state, I hadn’t been exposed much to seafood, and my fish eating was limited to tuna sandwiches, and fried cod loaded with tartar sauce. In 2018 I spent two weeks in Alaska, with friends, and was engulfed in a culture where eating seafood was a part of life. By the end of that trip, I had sampled three different types of fish, from dishes my friends ordered, and found them to be delicious, and that they didn’t bother my stomach. In 2019, I spent a few weeks in Washington, and tried more types of fish, committing to ordering my own dishes of them. Later that year, on my road trip to Maine, I fell in love with lobster rolls. On the Ireland trip, I had fish every other day. While I am not ready to prepare my own seafood, and am restricting my intake to ‘fresh’, which means that I won’t be eating it in the landlocked state of Colorado, I am officially adding ‘seafood’ to my diet, and feel it is a good substitution for cheese. I look forward to my next visit to the ocean, and likely will try other types of fresh fish found closer to home.

I tend to do smaller, more frequent meals. When adventuring or traveling keeping the same routine is impossible, but I often bring some food with me, so I always have something protein rich on hand, and can keep as much normalcy as possible. For road trips, I bring a cooler and a food box, sometimes never even having to stop for a resupply. On trips where I fly to a place, or am in another country, I enjoy trying new foods, that meet the meat and dairy free guidelines. There is always something available. Nepal was a particularly easy country to find food in, as are most places in the United States. Ireland was a bit more challenging, but thank goodness for delicious bread.

I have learned a lot about healthy food and diet, and getting a balanced diet in comes easily to me, because I feel better when I do. I use vitamins, oils, and supplements to make up for areas in which my diet or environment may be lacking (like adding oils, and taking vitamin D when I can’t get sunshine). I have cured health ailments, like chronic constipation, chronic pain, and headaches, through proper diet. I am continually learning new things, and experimenting with new foods, but being a dairy-free fish eating vegetarian is a lifestyle choice I will likely never give up.