Life Lessons from a Plane Crash 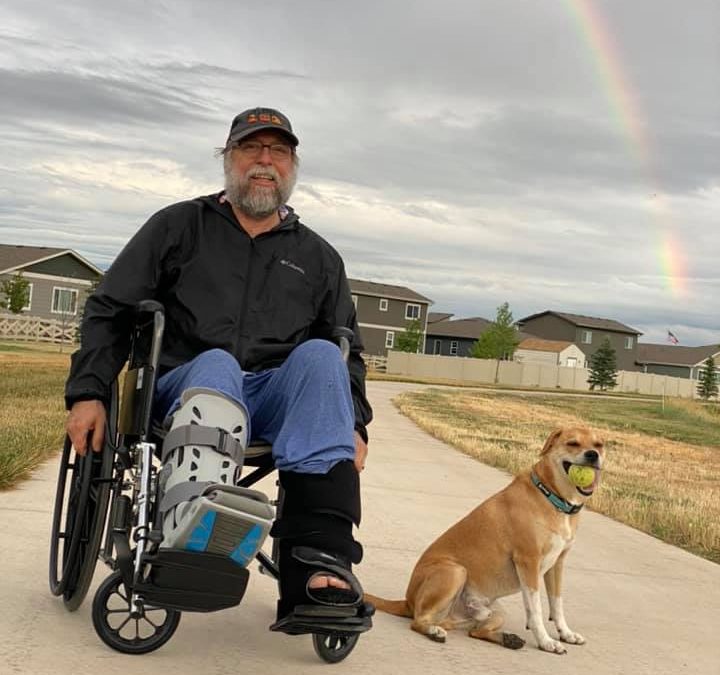 On May 28, 2021, at 10:41 am, a Pipistrel Alpha Trainer, N119JP Light-Sport Airplane crashed after an emergency landing in a field Northeast of Cobb Lake, south of Wellington, CO. The small two-seater plane had flown out of Fort Collins-Loveland Northern Colorado Regional Airport on this beautiful Spring day. William ‘Bill’ Snodgrass was piloting the plane, assisting another pilot, who happened to be the plane’s owner.

Bill decided he wanted to be a pilot during a trip to Alaska. He was an avid mountain climber then, and when the weather changed plans for a mountain summit, he and his friend took a flightseeing tour instead. As he saw the bird’s eye view of the Kenai Fjords, grizzlies playing, salmon choked streams, and Exit Glacier seeping into Resurrection Bay, he thought, “I should learn to fly!” So in 2004, he took lessons and began pursuing a dream of being a pilot.

In 2015, Bill and his wife Laura, who live in Wellington, founded Colorado Sport Pilot, LLC. Bill retired from 24 years working as a Software Developer and, in 2020, started giving flight lessons as a Sport Pilot Certified Flight Instructor. At the time of the accident, Bill had 1100 hours under his pilot’s license, was involved in various pilot organizations in Colorado and Wyoming, such as EAA and Angel Flight West, and taught many eager students how to fly.

That fateful day in May started as a typical Flight Review. They went over basic safety procedures and discussed the various items necessary for the flight review (a standard bi-annual requirement for keeping up on a pilot’s license). Bill demonstrated a maneuver and handed the controls over to Jim for him to perform the same maneuver. However, when Jim set up for it, he found the plane’s throttle was loose. Bill took back control and found the throttle so loose the cable pulled right out of the engine. The engine kept running at idle, but there was no way to control it.

“In an emergency, you don’t rise to the occasion; you default to your best training,” shares Bill. So Bill went down the mental checklist from all his training, honed in on a field he thought looked safe for landing, and set course to land. He didn’t know the field wasn’t flat until he was too close to change course, and the plane flipped over as soon as the wheels touched the ground.

The 20 ton-force and location of impact left Bill with a broken right leg (tibia, fibula, and broken ankle in three places), a fractured left foot, and a minor cut on the head. It earned him a LifeLine Flight to the hospital, which would be Bill’s second life-saving helicopter flight (the prior one was mountain climbing related). Jim walked away with minor scratches and bruises.

Bill said he believes Wellington Firefighters must drive around looking for accidents because one arrived on the scene right after the crash happened. Two other men arrived on the scene as well. All worked quickly to assess the situation and address safety, argue over the exact location of the accident, and make the call for the helicopter that would get Bill to the Medical Center of the Rockies quickly. While lying on the wing in pain, Bill decides to text his wife, who was in Estes Park for the day. Without his glasses lost in the crash, Bill texted, “Emergency Landing! Broker keg!” Laura thought he and Jim had instead gone to the bar and were drinking! So she texted back WTF?!? Bill then sent her a selfie with the airplane upside-down behind him. She called immediately to get the scoop.

In times of crisis, we do the best we can at the moment with the tools and resources available, but that doesn’t stop us from thinking about all the things we could or should have done differently. The audio recording of the accident shares Bill’s first words after the crash, apologizing to Jim for wrecking his plane. As Bill sat in the hospital, with a freshly installed titanium rod keeping his right leg together, he was grateful to be alive, but he was also depressed. He felt terrible about the plane, hurting his friend and himself, and was worried about being a burden to his wife, who would have to take care of him.

“You are in the hospital trying to get better for your body, so maybe you should talk with someone who could also help with your mind,” Laura nudged. So Bill talked with a social worker and received validation and encouragement to use the experience as a way to look forward. The best advice came not long after, as Bill was sharing the story with the Federal Aviation Administration (FAA) investigator. The investigator interrupted Bill’s self-flogging with a “You did your job. You protected people and property.”

According to regulations, the pilot in command is responsible for his passengers, people, and property. Bill had done a great job and was alive to tell about it.

Bill had a long road to recovery, and at age 60, his bones weren’t as vibrant as they once were. As his body healed, Bill’s mind got busy using the experience as a way to look forward. He prepared a presentation for the pilot community so that others could learn from his experience. He was able to fly again just three months after the accident, showing the testimony of his determination to get back in the air.

In disasters and crises, so many factors contribute to outcomes; any of them tweaked a bit could reveal considerably different results. The presence of a camera on the wing of the Pipi Alpha helped share the story of this event.

Bill’s presentation, given to a room full of pilots, students, and others on April 7, talked about what happened, what he could have done differently, and the various factors contributing to that fateful day. He didn’t discuss the pieces still under investigation by the National Transportation Safety Board (NTSB) and FAA.

Bill is a calm and humble man with a great sense of humor and joy for teaching. His peers joked with him as he hobbled to the front of the room with crutches and a walking boot. In January, Bill had to have another round of surgery after his bones were not healing right. By the end of the presentation, he had received two big rounds of applause as his peers congratulated him on a job well done on that fateful day.

“It is not about being afraid; it is about being aware and paying attention,” Bill reiterated. Whether driving a car, climbing a mountain, walking down the street, or flying a plane, you must be aware of what is happening around you and prepare to act if disaster strikes. That ‘action’ comes through education, practice, remaining calm, and staying focused.

Before the accident, Bill had big aspirations for all he planned to do with Colorado Sport Pilot and the pace at which he would do it. However, the accident gave him a real wake-up call about how short life is. “We spend a lot of time working and doing all these things until we get to the end, do some travel, then die. We have all been taught this is what we are supposed to do. Instead, we should be enjoying life all along, as it is over when life ends.”

On March 7, 2022, Bill received written orders from Dr. Stith with Orthopedic & Spine Center of the Rockies, stating, “You may fly. Do not Crash”. Bill, grateful to be alive and back pursuing his dreams of being a pilot, promises to follow the doctor’s orders.

This story originally published in North Forty News on April 18, 2022