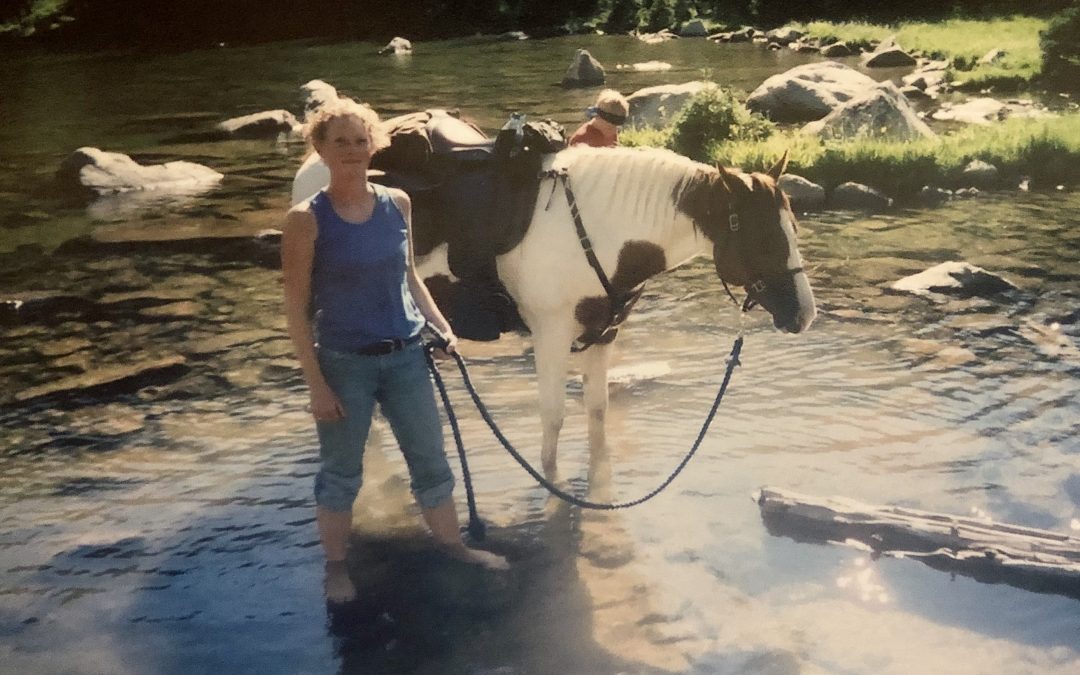 I first met Tate Wanagi, after responding to a Craigslist ad for horses for sale. I had been looking for a horse for my son, who was nine at the time, and was in need of something well broke and steady. The stubborn Morgan mare he had at home, was not making riding fun. Tate was in a herd of three horses, owned by a Lakota Sioux family, and was not the horse I had come to see. I was looking at an older bay gelding, who I really liked, but ultimately passed on, instead opting for an older grey Arabian rescue mare that we had found at another place, who would become a perfect teacher for my son.

I received an email from the family a few months later. The husband was ill with cancer, and they could no longer afford to keep or feed their horses. They liked me when they met me, and asked if I would take all three horses, for free. Two were registered paint geldings, and the third, the bay that I had liked, was a Morgan/Quarterhorse/Arabian cross named Sox. I agreed to take the horses, with the understanding that I may eventually need to rehome a few of them.

I immediately fell in love with Sox. He was energetic, but level headed, and a lot of fun to ride. Sadly, three months after arriving, Sox colicked suddenly, and died. The two paint geldings, Tate Wanagi, Lakota Sioux for ‘Wind Spirit’, and Wanbli Wanagi, Lakota Sioux for ‘Eagle Spirit’, both in their early teens, were challenging. They were trained to respond to Lakota Sioux words, were not used to bits or saddles, and really seemed to dislike being ridden by me. I ended up sending Wanbli to a trainer, as he had a habit of unloading his rider, and I worked with Tate myself. When I rode Tate, he would have his ears pinned most of the time, trying to go too fast, or, threatening to buck when I asked him to go faster. I used a hackamore on him, and made sure the saddle was fitted correctly, and not causing pain. I reached out to the family where the horses came from, and let her know of the issues I was having. Tate had been the husbands horse, and she let me know that her husband had not let his spirit go, and that was why he was behaving in that way. My other trail horse at the time, was showing signs of lameness, and my up and coming trail horse, was still too young for the harder trails. So, Tate would have to be my my trail horse, whether he liked it or not. I continued working with him, and got him to a place where he could be safely ridden.

I took Tate on several trailrides that summer, one being a camping trip to State Forest State Park, near Walden, Colorado. I went with my husband and his big paint gelding, and my son, and his Arabian mare. A few days into the trip, we took a trail up to Kelly Lake, an alpine lake at around 12,000ft elevation. The trail went through a boulder field and over a saddle behind the lake, and dropped down the other side to make a loop. Or so we thought. The boulder field had minimal trail, and I instructed everyone to get off their horses, and lead them through this part. Part way through the stretch of boulder field, Tate stumbled, and then fell from the trail and into the boulder field, where he began summersaulting down the side of the mountain. He would get stuck, and we climbed out to get him unstuck, and this repeated a few times, including taking his saddle off after it got stuck, traveling at least 50 feet down, before he was finally close enough to the edge of the boulder field, to get him out of it. The saddle no doubt saved his back, he lost a couple shoes, his legs were shredded and he had banged up some teeth, but short of the teeth, nothing was broken.

I led Tate back down the slope, and walked him out into Kelly Lake, where his wounds could soak in the cold alpine lake water. I had a tube of Tricare, which I emptied into his leg wounds, and we used what bandages we had to keep the dirt out. There were campers at the lake, who filled our water bottles and gave us some snacks, and we headed back down the trail we came, slowly and shaken. We ran in to a volunteer trail maintenance crew on the way down, who gave us more bandages. Tate was moving slow, and I was leading him, hiking in my water-logged hiking boots. My son, age 9, followed behind on his horse, while my husband rode ahead to try and find help. We had a 7 mile hike downhill to the trailhead, which was not where our horse trailer was, and it was evening and getting dark fast. We hadn’t been prepared to be out for the night, so didn’t have flashlights, and in the day before smart phones, all I had was the soft glow of my flip phone, to light the way. The volunteer crew had called for help, but no one ever showed.

The hike down was painful for both Tate and I. My water filled hiking books led to blisters everywhere, and he was missing half his shoes and dealing with pain everywhere. The hours ticked by. It was around 1am, when I heard a sound in the woods ahead of us. A herd of elk, very close to the trail. I told my son to get off his horse, having no idea what would happen when the herd saw us, and they sounded to be about 30 feet away. I made noises letting them know we were there, held up the soft glow of my cell phone, and did my best not to let fear take over. Just then, I heard the sounds of a 4wheeler, and a flood of headlights lit up the herd, who quietly walked off into the woods. My husband had found a crew of trail maintenance volunteers camping near the trailhead, and one took him to our campground, so he could bring back the truck and horsetrailer, and another hopped on his 4wheeler to come up the trail and find us. Couldn’t have been timed more perfectly. We put my son on the back of his 4wheeler, I hopped on my son’s horse, and ponied Tate the rest of the way to the trailhead. My husband’s horse, in a panic, had untied himself and came barreling up the trail to find us, adding another horse to the ponying chain. Not long after, we were all reunited at the trailhead, and let the horses rest as we were invited into their camper for hot cocoa and dump cake, by the man’s wife. It was around 2am at the time, and was very much appreciated. After a recoup, we loaded the horses up into the trailer, and headed back to our campsite, where I had more vet supplies, stalls for the horses, and again cleaned up Tate.

The next morning, it was a Sunday, and we went into Walden to try and find more vet supplies and possibly some medicine. We stopped at a gas station, and asked the attendant for recommendations. She put us on the phone with the vet, who was not in his clinic because he was in the mountains trying to find something he had lost hunting the winter prior, but he said that his clinic door was open, and that we were welcome to go in, get the supplies we needed, and he suggested grabbing a bottle of penicillin. We would return Monday morning to pay him. Such a huge blessing by a stranger, who I later learned had known the veterinarian that my mom had worked for, back in Missouri. We stayed a few days, to let things settle for Tate, before we loaded him back up and drove the 3 hours back home. His wounds would take about 6 months to heal, with some vet visits at home to have the broken teeth removed, and some proud flesh taken care of. We had gotten extremely lucky.

A special thing happened after this incident, in that there was a total shift in Tate. A horse who used to snort and pull away when I tried to hug his head, would now walk up to me and put his head against my chest, and let me wrap my arms around him. He had completely softened, and seemed grateful. The change was so significant, that we decided to change his name. His registered name was Lakota Cole, so we started calling him ‘Kota’. I trail rode Kota for another year, until my son had outgrown his old grey mare. I let him ride Kota, and they hit it off immediately. Kota would then become my son’s horse. Full of energy, solid and reliable, and an excellent trail horse. We would return to that trail to Kelly Lake (not attempting the pass), and I could tell he remembered it, but he carried on as usual.

During one of his vet visits for his teeth, while under sedation, we discovered that he had cancer on his penis. This happens to pink skinned horses, and being a paint, he had quite a bit of pink skin. There were different treatments we could try. One thing about Kota is that he hated needles. I am not sure if he had never been immunized before, or if he had had a bad experience, but he was the most challenging horse to immunize, losing his mind at the site of a needle, shaking, tightening up, and retreating. I worked with him a lot on it, and even the site of a pen sent him out of his skin. You can imagine how hard it was to sedate him. Since many of the treatments required sedation, we started with a cream that just had to be put on the lesions. I got real good at sneaking it in, and it helped, but he eventually caught on, so after several rounds of treatment, my approach was no longer safe or effective. I did take him in to get the spots frozen off, and this helped, but was another bad experience at the vet, making it feel impossible to do more. I resorted to keeping an eye on him, and monitoring for discomfort. Me son continued riding him, and he was around for another three years. When he started having a lot of bleeding, and showing signs of discomfort, it was time to put him down. It was a hard decision to make, but one has to take into consideration the distress an animal goes through when receiving treatment to prolong the inevitable.

Sometimes animals find their ways into our lives, and change us. Sometimes animals change because of us. Kota was a very special horse to my son and I, and will never be forgotten. I learned from the experiences had on the mountain that day, and never again would hit a trail without plenty of food, emergency gear, a flashlight, and a water filter. We were extremely lucky not to have had to put a horse down that day, and were blessed by the people we met who helped us. I have a scar on my thumb from the rope burn that I got when the rope slipped through my hand, as he fell, that will forever remind me of the events that happened that day.