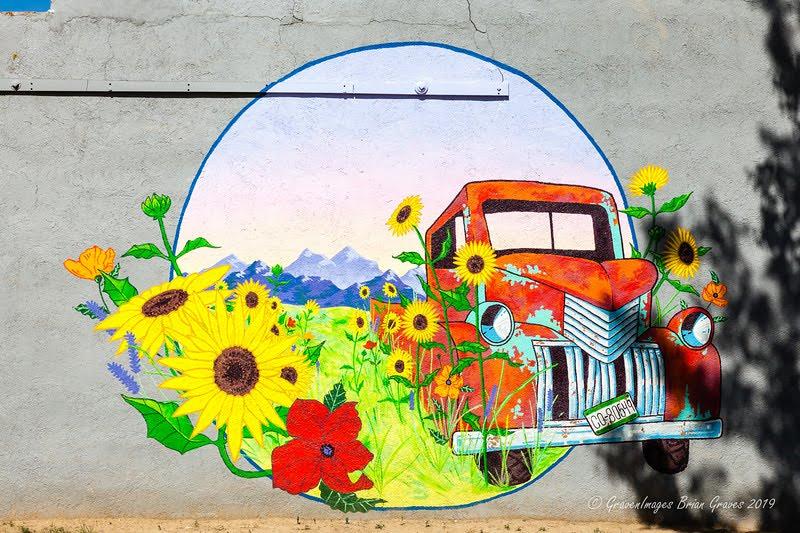 If you have driven through the heart of Wellington recently, you might have noticed the addition of two new murals on the west end of the downtown area. One on the auto shop building, and the other on the brick building next to the railroad tracks. These mural projects were initiated by the Wellington Co Main Streets Program and were both completed in July of 2019.

The first mural, located alongside the railroad tracks at 8141 1st. Street, is called Wellington’s Memories and Beginnings, and is a Diamond Vogel Acrylic paint on wood and metal mural. This mural features the historic Wellington train depot that once stood near the mural location, and beet farming, which was a big crop at the time of Wellington’s inception. The town itself, was named after C.L. Wellington, a train conductor who helped bring the rail up to Wellington, for easier transportation of beets to the factory in Fort Collins. This mural is on the west end of the historic Corbin-Black Lumber Company building, which originated in 1904 and is one of Wellington’s oldest buildings. The mural is unique in that it spreads across the ends and side of 2 buildings, includes the metal fence that runs along the west side, creating a 3-dimensional image on a variety of surfaces, while still preserving the building’s original historic brick. The mural was created by local artist, Daphne Potter, of DL Designs, and took almost 2 months to complete. The funding for this mural came from the 0.5k Wellington Fun Run fundraiser, held on April 6th of this year, and through a very generous contribution made by the building owner. Daphne Potter said, “It was a great experience painting this mural in my local community.” She had her daughter helping her with the tail end of the project, making it a memory they both will always share. This mural provides a welcoming addition to the West entry of town, while honoring an important part of Wellington’s history.

The second mural, located on the east facing side of the Knaack of it Automotive building, at 3703 Cleveland Ave. is called Reclaimed by Nature, and is an Acrylic Latex on Stucco painting, featuring an old ford truck and native Colorado flowers, with the rocky mountains in the background. The artist, Joe Hamman, grew up in Wellington, and did this mural while home from school for the summer. He is working on his art degree at Lesley University in Cambridge MA., and will graduate in 2020. This is the second mural Joe has done for downtown Wellington, the other one, completed in 2018, is located on the Sol De Jalisco building. The paint used was donated by Sherwin Williams. The funding for this mural project came from the 2019 Wellington Brewfest event fundraiser. This project has a unique story of community pride, in that Joe’s father is Mayor Troy Hamman, and his grandfather has lived in Wellington since the mid 1970’s. There were four generations of the Hamman family at the ribbon cutting. Joe describes the mural process as being a large and challenging undertaking, filled with excitement and the reward of making something that people enjoy every day in their community. “I’m so grateful for the opportunity to give back to my hometown,” Joe says. This mural is a fun and colorful addition to what was previously a grey wall over a dirt lot.

The mural projects are a creative way to add color, vibrancy, and community pride into the downtown area. Each project showcases local talent, between the artists and the Wellington Main Street Program design committee members. Each requires collaboration between the building owners, the volunteers, the artists, and the funding sources. Each becomes a unique addition to the downtown area that many were able to be a part of, and even more will be able to enjoy for years to come. The Wellington Main Streets Program is a nonprofit organization, made up of volunteers and staff, working towards a common goal of making downtown Wellington a great place to be, and each project is a reminder of the incredible things that happen when a community comes together.