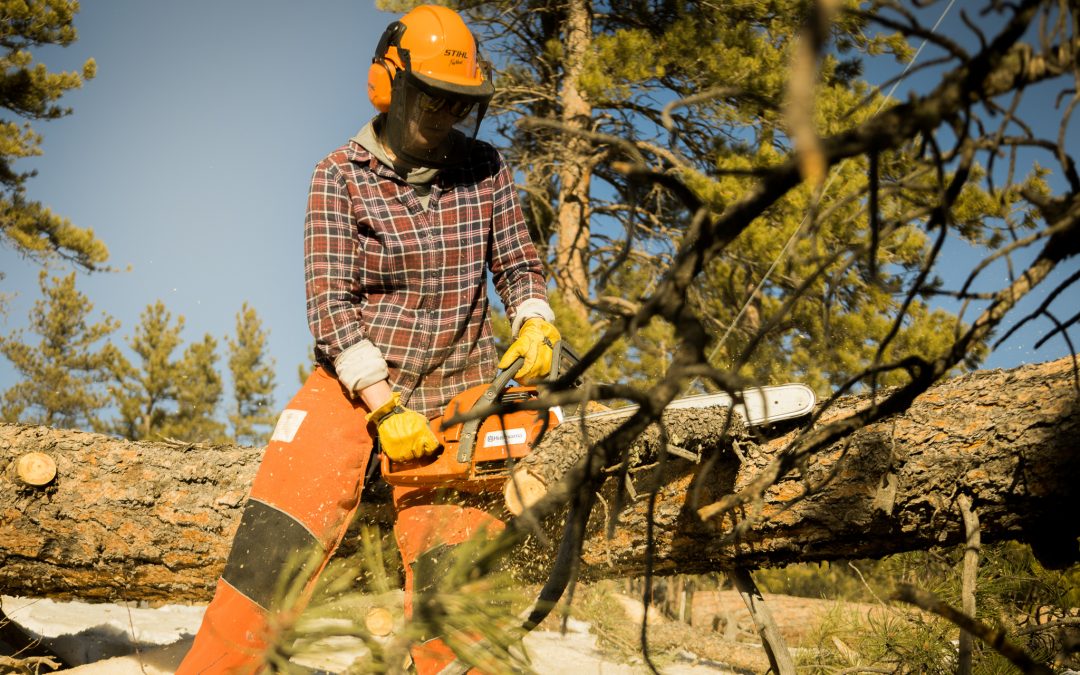 How we take care of our forests relates to how our forests take care of life in and around them. Healthy forests impact our food sources, water, air, and ability to withstand devastating fires.

The forestry restoration work done at Drala Mountain Center in Red Feather Lakes, CO, formerly known as Shambhala Mountain Center, is a shining example of how a properly managed forest can prevent wildfires from further spreading.

Mac McGoldrick, the Senior Director of Built and Natural Environment for Drala, was hired in 2017 to focus on better land management efforts for Drala’s 600 acres (among other job duties). He immediately engaged with various regional conservation management and education agencies. DMC has since received awards and visits from prestigious officials recognizing their successful work.

Mac first started working with Gretchen Reuning and the conservation team now called Larimer Conservation District (formerly the Fort Collins and Big Thompson Conservation Districts) in 2017. They assessed the needs of the land and began phase one of a landscape-scale forest restoration project for 220 of DMC’s acres in September of 2018. They received funding from the USDA Natural Resources Conservation Service’s (NRCS) cost-share program called the Environmental Quality Incentives Program. Landowners and managers can apply for this funding to help implement conservation activities on their land. LCD used this funding as a match to receive funding from the Colorado State Forest Service’s Forest Restoration and Wildfire Restoration and Wildfire Risk Mitigation grant program. Another round of funding supported the project’s next phase, which wrapped up in February 2022.

Mac shares, “We learned from this process that conservation work is less about fire mitigation and more about creating a healthy forest and recognizing our place in the larger ecosystem. We create the circumstances for tree health, diversity, wildlife habitat, contributing to the overall health of the forest, and being good stewards of the land.” When the Cameron Peak Fire hit in 2020 and made its way over the ridge onto DMC property, 60mph+ winds and hot and dry weather contributed to severe fire conditions. However, when the fire reached the restored stands, firefighters were able to contain it and mitigate the fire’s spread.

Forest management can be a controversial topic. Science and research show that we have had such massive fires recently due to over 100 years of fire suppression, over-grazing, climate change, and a notable lack of effective forest management. Forests in the lower montane zone along Colorado’s Front Range historically saw fires every 5-25 years as part of the natural cycle of the forest. But, as Europeans moved in, there has been more focus on protecting spaces for humans than there has been for letting the forests manage themselves naturally through disturbances such as fire, diseases, pests, and more. This has led to overgrown forests with large amounts of fuel (anything that can burn) that are prime for spreading catastrophic wildfires. A healthy and ecologically functioning forest has a mosaic look with large open spaces rather than the dense canopies we see throughout unmanaged forests.

Forest management isn’t just about fire mitigation. It is about having healthy spaces for the plants and animals that call the forest home and biodiversity that protects the forest when species-specific diseases sweep through. It is about our water systems and assuring they remain healthy by not getting flooded with runoff and sediment from fire-damaged land. Finally, it impacts cities because humans depend on food, water sources, and air quality impacted by these massive fires.

The team at LCD can look at the land and see what the forest used to look like before European settlers’ influence. Dylan Alsbach, LCD’s Conservation Forester, says, “We go to properties and look at what evidence is there, and what it would look like if fire had been able to come through. We assess understory plant life, overall forest health, and animal life. All those main points are more important than fire mitigation because a healthy forest is naturally more fire-resistant. We can show landowners the various features of their land and educate them on how a fire would interact with that.”

Mac shares, “We could not have done the work at Drala Mountain Center without the help of LCD; they are my heroes. They were instrumental in explaining the project to our staff and communities.” Gretchen adds, “As we work with these property owners, we build strong relationships, which contributes to the success of our program. Without folks like Mac, we wouldn’t have as much success reaching other landowners in the area.”

When conservation work is being planned, additional landowners in the area are encouraged to participate. It is easier and more impactful to manage adjoining properties as one project. For example, the phase II project on DMC included working with the neighboring Ben Delatour Scout Ranch on 80 acres of their land. “We try to loop landowners in together to have a bigger footprint and a Landscape Scale impact,” shares Gretchen.

LCD has projects across Larimer County, from Allenspark to the Wyoming line. Anyone can reach out to Larimer Conservation District if they want technical or financial assistance. Project management is LCD’s expertise; they handle the planning and administration of the projects, contracts, and management of loggers and answer all the landowner’s and invested parties’ questions and concerns.

What can we do to help?

Gretchen shares a need for more logging contractors as one of their biggest challenges. “We don’t have many local loggers able to tackle work at this scale, and the ones we have we keep very busy. This is a huge need in the state, and there is money and prioritization in Larimer County available as we are actively trying to build our contractor base. There is a ton of opportunity for work in the field.”

Gretchen also shares the importance of removing fuels. All those limbs and other woody materials on the ground are fuels and ideally need to be removed from the area before they become fuel for future fires. This is done by chipping and hauling them off-site or through burning slash piles.

With fire seasons starting to be year-round, it is essential to be thinking about what we can do to help take better care of our forests.