Cleveland Avenue was once part of the Lincoln Highway? Downtown Wellington, the teenage years 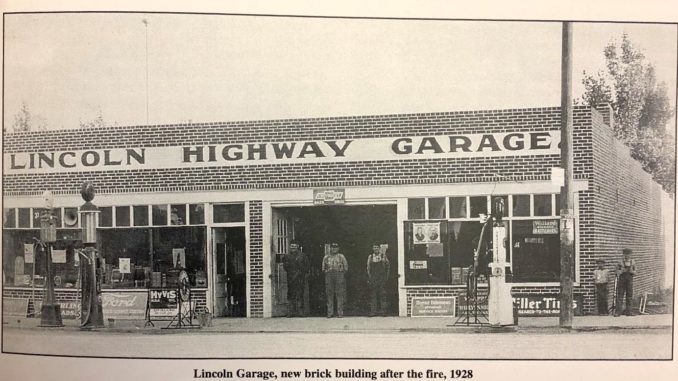 Cleveland Avenue was once part of the Lincoln Highway? Downtown Wellington, the teenage years…

Wellington, established in 1903, saw much growth during the first decade of the 20th century. The second decade, 1910-1920, also contained many important milestones for the town’s history. While Wellington’s population didn’t change much during this decade, resting around 480 people, many more visitors came to town with the expansion of the railway, roadways, and the short-lived inclusion along the Lincoln Highway.

The decade began with the completion of the railway line through Wellington on to Cheyenne, with the first passenger train traveling from Fort Collins to Cheyenne on October 15th, 1911. In 1914, loads of gravel were brought in to improve two and a half miles of Wellington’s streets, and Cleveland Avenue saw its first concrete sidewalks.  In 1916, Western Light & Power Company brought electricity to town, allowing for businesses and houses to be connected to the grid, and for the installation of twenty-two downtown streetlights.

There are several current downtown buildings born during this decade. The building located at 3739 Cleveland Avenue, that now houses Wellington Auction, looked much like it does today starting around 1917. The first building on this property, Tingle Livery built in 1905, was a livery and feed barn. It was purchased by John Wich in 1913. Mr. Wich was a mechanic who owned a business on 2nd Street, that was a blacksmith shop, auto shop, and sold autos and farm machinery. He moved his business, J. W. Wich Garage, to the new location, but shortly after changed the name to the ‘Lincoln Highway Garage’ to associate with the Lincoln Highway. In 1917 Mr. Wich purchased an adjacent lot and built an ‘L’ shaped brick building around the original building, that was big enough to house 30 cars, and that featured tall glass windows all along the front. The original livery portion of the building was demolished in 1919, and a new brick addition added. During the 1920’s the business grew to include being an authorized service shop, selling auto parts and tires, and offering towing services. A gasoline tank buried in the ground in front of the building provided fuel for motorists. In 1926, the building burned in a massive fire, that destroyed the structure and everything inside, include 18 vehicles. Mr. Wich worked quickly to rebuild the building, and within months was back open for business, with fresh brick and refurbished façade, and offering a few more gas pumps along the curb. The brick was painted sometime in the 40’s, but otherwise very little changed about the exterior of the building. The Lincoln Highway Garage continued to serve downtown Wellington on through the 50’s, after John Wich died in 1948 and the business was passed on to a son, Harmon Wich. In 1960, the property was sold to North Poudre Irrigation Company, who updated the sign and used the building as a garage and shop until 1985, when they sold the property to the Smelker’s. The Smelker family turned it in to Smelker’s Auction service, now known as Wellington Auction. They made a few changes to the storefront, windows, and doors, and added fresh coat of paint. This building is eligible for historic registry due to minimal changes made to the structure and to the historical significance of this building’s story.

Two other downtown business buildings were born during this decade, the ones that now house Wellington Grill and Papa’s Table, were built in 1919 and celebrate 100 years this year. Stay tuned for next month’s article on those two buildings, and more of downtown Wellington’s history.