A Wild Night in Downtown Wellington 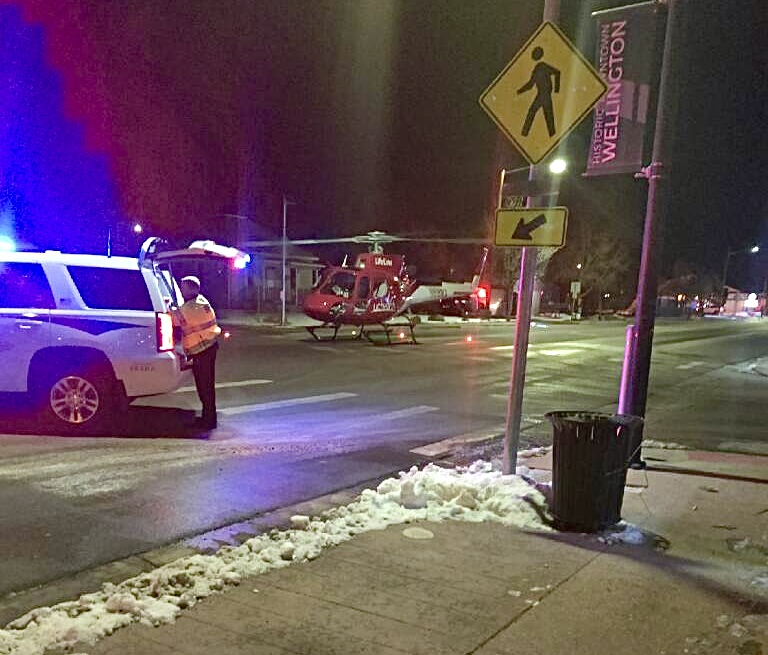 January 10, 2022, was an exciting day in Wellington. Many heard reports of the officer-involved shooting that started at Family Dollar and ended on East Mulberry in Fort Collins after a vehicle pursuit. This mid-afternoon event made Denver news. However, what didn’t make the news (until now) is what happened that evening….

North Forty News shares the story of ‘what are the chances?!?’ And, thank goodness everyone was ok.

The Gaiters, who live along Cleveland Ave, heard the sounds of the accident. The scene outside was a wild one, as a two-vehicle crash led to a truck hitting a power pole at the corner of 4th Street and Cleveland Ave. This power pole also held the Holiday Decorations that spanned across Cleveland Avenue on the East end of downtown. The power pole, entirely out of the ground, balanced perfectly on top of the truck, with live power lines touching the truck. The woman and dog inside the truck had to stay put as touching the outside of the truck would have caused electrocution. The rubber tires grounded it out, so they were safe inside as long as they didn’t touch anything metal. Law enforcement and fire protection arrived on the scene, but they couldn’t get the person out of the truck until the power was shut off. This took about 20 minutes.

Meanwhile, a Flight for Life helicopter was called in, as is standard protocol for situations with live wires and potential for electrocution. Curtis Smelker, the owner of Wellington Auction, a business that has been in downtown Wellington since the ’80s, watched a first for downtown Wellington. A helicopter landed in front of the T-Bar Inn. Curtis watched as flower planters and sidewalk furniture flew by the mighty wind set off by the helicopter blades. “It was incredible watching the pilot land without hitting the power lines along the street,” shared Curtis, who backed away to avoid being hit by flying benches.

Trustee Jon Gaiter shared in the trustee meeting Tuesday night how great of a job the various organizations did in working together to address safety and prevent further catastrophe.

In the end, everyone involved walked away unharmed. So all that is left is a story of how the holiday decorations came down a little early this year, coinciding with the first, and hopefully last, time a helicopter has to land in the middle of downtown Wellington.