A Smoking Deal for a Trip to Ireland 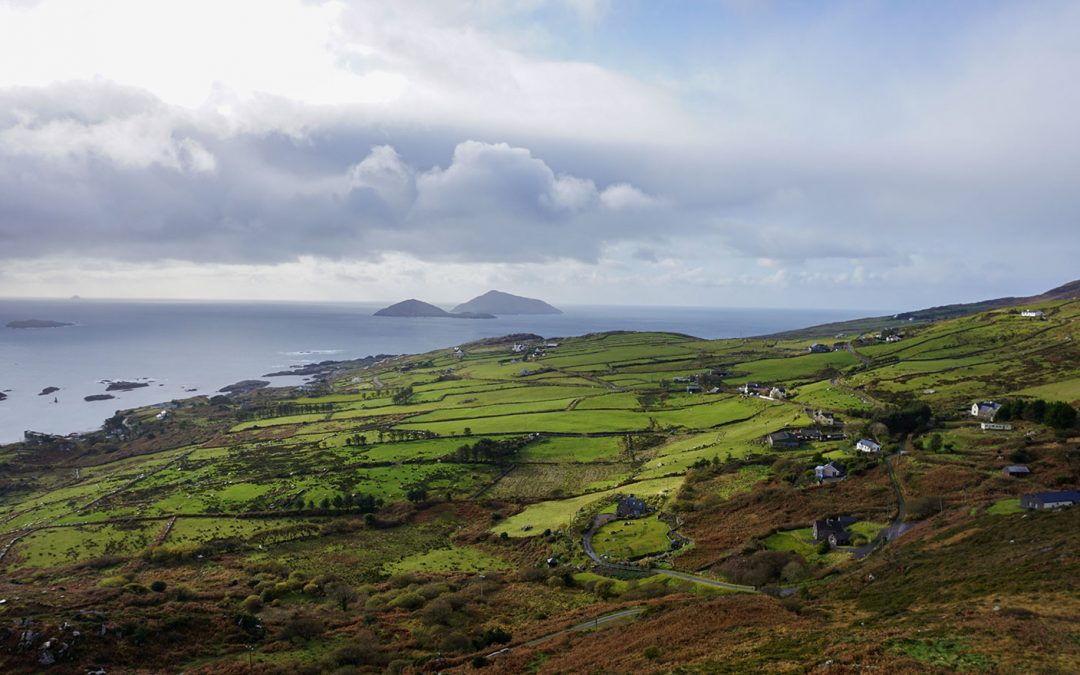 A trip that came to fruition after a smokin’ deal hit the email inbox. Travel Zoo offering a deal for $699 per person, for the flight from Denver to Ireland, six nights in four hotels, and a rental car, for a 7 day stay in Southern Ireland, that felt too good to pass up.

Six of us, connected through friendship and workspace, decided to go, and I picked a middle November week that ended up working for everyone, after a last minute date change by a day, when the seats had filled up already for the original pick. We would fly in to Dublin, drive south to Waterford for the first night, then West to Bantry for two nights, then north to Tralee for two nights, and back east to Dublin for our final night.

Our flight took us over the ocean over night, and we landed in Dublin in the morning of the 14th. With very little sleep, we headed to the rental place to pick up our chariot for the week. Our reservations came with 3 separate included rental cars, but we decided it would be best to upgrade to something big enough for all 6 of us. This cost more of course but was a decision we wouldn’t regret. I offered to be our driver for the trip and was excited to learn how to drive on the left side of the road. I was grateful for the last minute decision to get an automatic over a manual, as while I knew how to drive a manual, I would simultaneously be learning to drive on the opposite side of the vehicle, opposite side of the road, and in a big van over very narrow streets. We were given a large 9-seater Peugeot Expert diesel van. Most of the vehicles were diesel in Ireland. We named our van the ‘Lioness,’ for the lion symbol on the back, which sounded more like ‘Linus’ after a few days on the road.

Our first stop was Waterford, after a 2-hour drive from Dublin, and a stop halfway at a bakery that was nestled inside a gas station convenience store. Our first taste of the delicious breads we would find all around Ireland. We made it to Waterford mid-afternoon, with enough time to tour the Waterford Crystal Museum before the sun went down completely. It was interesting learning how Crystal was made, all that is done with it, and the history of the place. Afterwards we checked in at Dooley’s Hotel, where we would stay for the night. Navigating the narrow Waterford streets, and parking, was a challenge, but we figured it out, and by the end of it I was getting the hang of driving on the left side of the road.  For dinner that night, we would eat at The Gingerman Bar, where we had our first sampling of Irish food, and many of us had our first sip of real Guinness. Delicious.

The next morning, we met for breakfast at a restaurant a few blocks from our hotel, and then walked on to check out the Medieval Museum, Bishops Palace, Christ Church Cathedral, and Reginalds Tower. Waterford is the oldest city in Ireland, with over a thousand years of history, starting with the Vikings who founded Waterford in 914. A few places were closed, due to being off season or under construction, but we were able to spend time in the museum, learning of the history of the place, and we visited the Christ Church Cathedral. We left the city a little after noon and headed westward.

Along our drive west, we stopped at Dungarvan, to see a castle along the bay, and for a late lunch at The Moorings.  Afterwards we went on to the Jameson Distillery in Midleton, and found it too late to do a tour, but were able to visit the store and pick up some samplers for enjoying later. The drive to Bantry was longer than expected, and was along narrow shrubbery lined roads, with traffic that made our big van feel too big for the road. Often so close to the shrubbery that the mirror hit along the way. I was more than ready to be out from behind the wheel, once we made it to Bantry. We checked in to the Westlodge Hotel, where we would stay for two nights, and then made the first of many walks down the hill, past the cemetery, alongside the bay, and in to the cute bayside town of Bantry. We found dinner, and then wondered around in search of music. A late night that ended with catching the last few songs of the hotel’s music entertainment for the night.

The Westlodge Hotel was the only hotel of the trip that offered complimentary breakfast, and we kicked the day off with our fill. This day would be one spent on foot, rather than wheels, which we all seemed grateful for. We walked over 12 miles, exploring the town further, taking a walk along a trail through the hills above Bantry, and then a return to explore the cemetery that we had been walking past. There had been rain in the forecast, but we were lucky not to get any, and the views while walking through the hills, were incredible. We hit a bakery on the way through town, and after we got back to our hotel, we took advantage of the in hotel spa, with hot tub and sauna, and then had dinner at the hotel restaurant. This day was our first taste of the iconically beautiful Irish countryside, with its field of sheep and cattle, it’s abandoned farm houses, its narrow roads lined with brick and rock buildings, the many shades of green, and the ever wet lush hills, that left the boots wet and muddy.

The next morning we started with a quick walk up the hill to a stone circle that was behind our hotel, and through a muddy cow field. Circles like these were use to tell date and time, and are similar to Stonehenge. Back to the hotel, we had a big complimentary hotel breakfast, and then hit the road for a day spent driving the Ring of Kerry.

Our first stop was at Molly Gallivans, an old farmstead on the side of the road, with an interesting history. We found locals gifts to take home, and had an opportunity to try some fine Irish Poitin (potato whiskey). Onward, we stopped at the Staigue Fort, which claims to be the largest and finest stone forts in Ireland. The rock wall and rooms within the wall were well designed without the use of mortar. For lunch we had stopped at an Irish grocery store full of fun foods not found in grocery stores at home. Then, we followed the coast along the peninsula, viewing breathtaking beaches and ocean front vistas. We stopped along Ballinskelligs Bay for a walk to an old monastery, cemetery, and castle, and hurried over to Valentia Island, to catch a sunset. A long walk to a tip of the island, with a lookout building, sheep, and panoramic views, was the perfect finish to a stunning day. We learned more about farming in the area, visiting with a handsome sheep farmer and his dog, out checking on their flock. We drove through narrow single lane countryside, much of the way, and the sun shining most of the day created moment after moment of awe with our surroundings.

We had a drive through dark to get to Tralee, and putting our bags down in the Rose Hotel, where we would stay for two nights, we had dinner in the hotel, and then headed to town to find some Irish music. Interestingly, all of the music in pubs that we had seen thus far, was actually American music, leaving us longing for something more authentic. The first pub we stopped at, Sean OG’s, was welcoming indoors, so we grabbed a beer and listened to the music, playing mostly American songs, including John Denver. We moved on to another bar, Kirby’s Brogue Inn, and here we found the real deal. A table full of older gentleman singing and playing instruments, filling the bar with traditional Irish tunes. We had made it there for the last few songs, but after the group finished, a table full of men in the corner began singing, and those surrounding them joined in. Such a treat.

The following morning we set off to explore the Dingle Peninsula, stopping in Tralee for coffee and scones to go. There were many sites to see along the way, and choosing which ones to visit was challenging, but we saw a castle guarded by sweet donkeys, made wishes in a wishing well, saw historic burial stones, beaches where Star Wars movies were filmed, a landscape covered in historic building structures, visited a monastery, another castle, and a battle site. We took our big van down narrow muddy country roads lined with berry bushes, while searching for castles we would never find, and then over narrow mountain passes, for views that carried on for miles. We returned to Tralee just after sunset, and set out on foot to find a great place for dinner. We found that in Bella Bia, along with a feisty waitress who made sure we had a good time while we were there.

The next morning, it was time to head back East, and after an impressive breakfast buffet spread at the hotel, we loaded up and headed out. It took us about four hours to get back to Dublin, on interstate that felt extra roomy after all the country driving, including a few gas station stops, after not quite putting enough in the tank the first stop, allowing for some fun road snacks. I had downloaded a bunch of Irish music for listening to along our drives, so The Dubliners, Flogging Molly, Billy Bragg, Black 47, The Pouges, and the Chieftains, kept things lively.

Before getting in to Dublin, we visited the Newgrange site. This incredible place is 5,200 years old, built by Stone Age farmers, and predating Stonehenge and the Great Pyramids. It was a burial tomb and spiritual place with a special feature, in that a passageway allows light to enter the chamber only during Winter Solstice. The tomb has beautiful architecture made with stone, and carvings in the stone, engraved with megalithic art, and we were able to tour inside the tomb.

We then went to Dublin, and after an impressive parallel parking job (with friend’s help), we toured the Dublin Castle, and walked around downtown Dublin a bit. We checked in to our final hotel, made a choice of the several restaurants in the bottom of the hotel, enjoyed our meal, and were off to bed for a very early wake up call.

The next morning, we woke early, dropped the van off at the airport since it was before the time the rental place opened, made it through the airport with plenty of time to board for a short flight to London. In London, we made it through customs, had breakfast, and boarded the plane for the long flight back to Denver.

The trip was fantastic, start to finish, with the only complaint being a shortage of time to see more sites. Our hotels were nice and comfortable, our experiences with the people and food establishments were fantastic, the food and beverages were great and reasonably priced, and we got extremely lucky with the weather. I am already planning a return trip, to explore more of the hiking trails that line the coast.