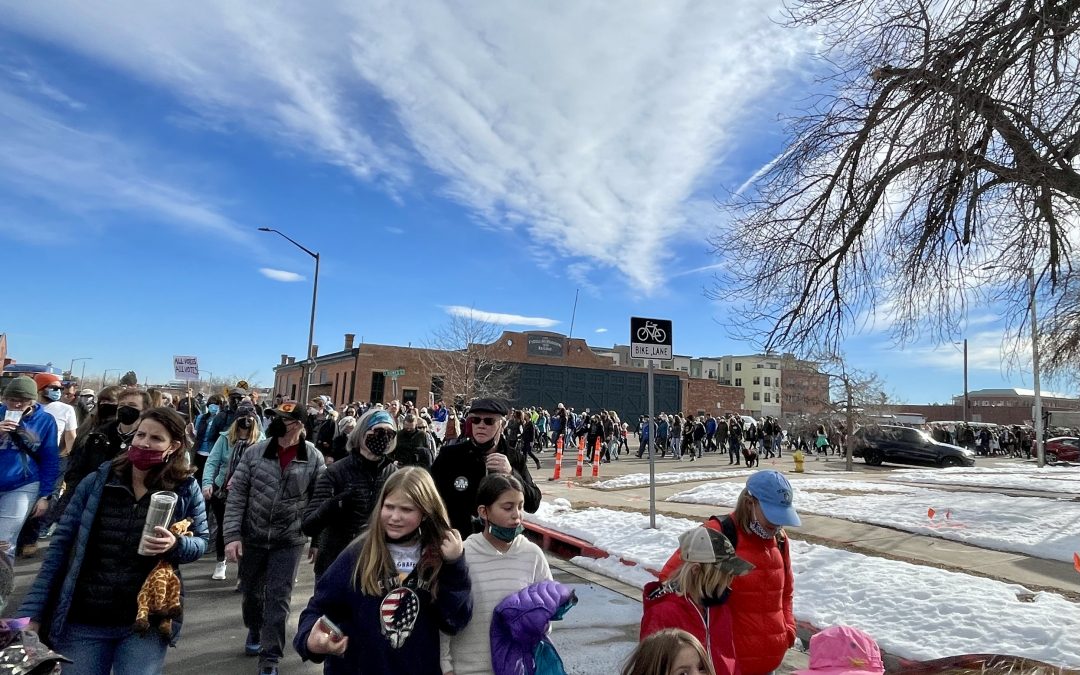 ‘The March is far from over’ was the theme for this year’s Dr. Martin Luther King Jr. Celebration Event in Fort Collins. The weather was beautiful as we gathered at Washington Park for the beginning of the ceremony and to hear the names and accomplishments of those selected to lead the March that kicked off at 11 am.

This year, the March took a different route, including a walk through a neighborhood significant in Fort Collins’s Black history, where north Meldrum Street intersects with Maple and Cherry Streets. The new March route went past the Thomas Residence, McDaniel Residence, Hicks and Lyle residences, and the Clay Residences.

Virgil Thomas was the first Black student to graduate from Fort Collins Highschool. He was a star athlete, a boxer, a football player, and starting pitcher for Fort Collin’s softball club. He was awarded an athletic scholarship, and while in college, he was drafted into the Army and sent to fight in World War II. Later he raised a family in New York City.

Hattie McDaniel was a nationally famous film, and radio star the spent childhood years in Fort Collins. Her family lived at 317 Cherry Street, and her parents were gospel singers; her dad was an itinerant Baptist preacher and teamster. Hattie attended Franklin School at Howes and Mountain. She would become the first Black American to win an Academy Award for her 1939 role in Gone with the Wind. She later participated in the 1945 ‘Sugar Hill lawsuit that ended restrictive racial covenants in her, then, Los Angeles neighborhood.

The Clay family had a long-standing presence in the community, starting when Charley Clay arrived in Laporte in 1865. Their Fort Collins home, at 317 Maple, became the center of Black social life in Larimer County during the early 1900s. There was a Colored Mission that grew into the Zion Baptist Church, ministering to families around the region. There were important social gatherings and events, like the Paul Laurence Dunbar Literary Society, discussing social and political issues. The last of the family had all dispersed from the area by 1920.

The Lyle family moved from Kansas to Meldrum street by 1900. They worked as janitors and housekeepers until the 1940s. In 1939, Mattie Lyle made civil rights history when she sued the owner of the State Theater on North College for discrimination.

This annual March was canceled last year as a result of the pandemic. This year, most of the 1,000 attendees wore masks; many felt wary of the ‘indoors’ portion of the event and felt gratitude for the opportunity to gather when gathering is made challenging. The March ended at the Lory Student Center, where the celebration went indoors.

This year’s keynote speaker was Ms. Carlotta LaNier, a civil rights icon, National Woman’s Hall of Fame inductee, and is in Colorado Woman’s Hall of Fame. In Arkansas, at age 14, Carlotta was the youngest of nine African-American students known as the ‘Little Rock Nine,’ nine students who integrated Little Rock Central High School in 1957, after the U.S. Supreme Court declared segregation in public schools unconstitutional. They experienced a lot of discrimination, being the first Black students to enter a school that only ever had white students. She was the first African-American woman to walk across the Central Highschool stage to receive her diploma. She and the other Little Rock Nine received the nation’s highest civilian award, the Congressional Gold Medal, from President Clinton in 1999.

Carlotta met Martin Luther King Jr. in the ’50s when she was 14 years old. Before he was famous, this was just a ‘preacher on a mission as she described him. A human being with faults and weaknesses, just like the rest of us. She shared her memories of him then, after he became famous, and what she knew he would say to us now.

“We all have gifts and talents; We have to ask ourselves ‘how are we using them’? Dr. King wasn’t superhuman. He was just a man who put his gifts to work for the good of humankind. We don’t honor him because he was perfect or superhuman. We honor him because he answered the call to serve humanity. If Dr. King were here today, he would remind us that we all have gifts to share and a role to play in creating the kind of society we desire. He would remind us to examine ourselves and ask what we are doing to make a difference,” shares Carlotta LaNier.

Martin Luther King Jr fought for equality and rights and played a significant role in activism efforts during the Civil Rights Movement. He accomplished so many great things before his assassination in 1968. He organized nonviolent Marches, and it was during the 1963 March on Washington where he delivered his “I Have a Dream” speech at Lincoln Memorial. In 1986, Ronald Reagan established the third Monday of January as Martin Luther King Day, in honor of Martin’s January 15 birthday.

It is 2022, and the pandemic still plagues life to some degree or another for all of us. So these opportunities to gather as a community feel extra special. It was an interesting walk through local and national history and a refreshing reminder that it is never a bad time to put talents and gifts to good use in positively impacting the things we feel passionate about. The March is far from over.

For more information on the Black American history of Fort Collins, visit fcgov.com/historicpreservation.