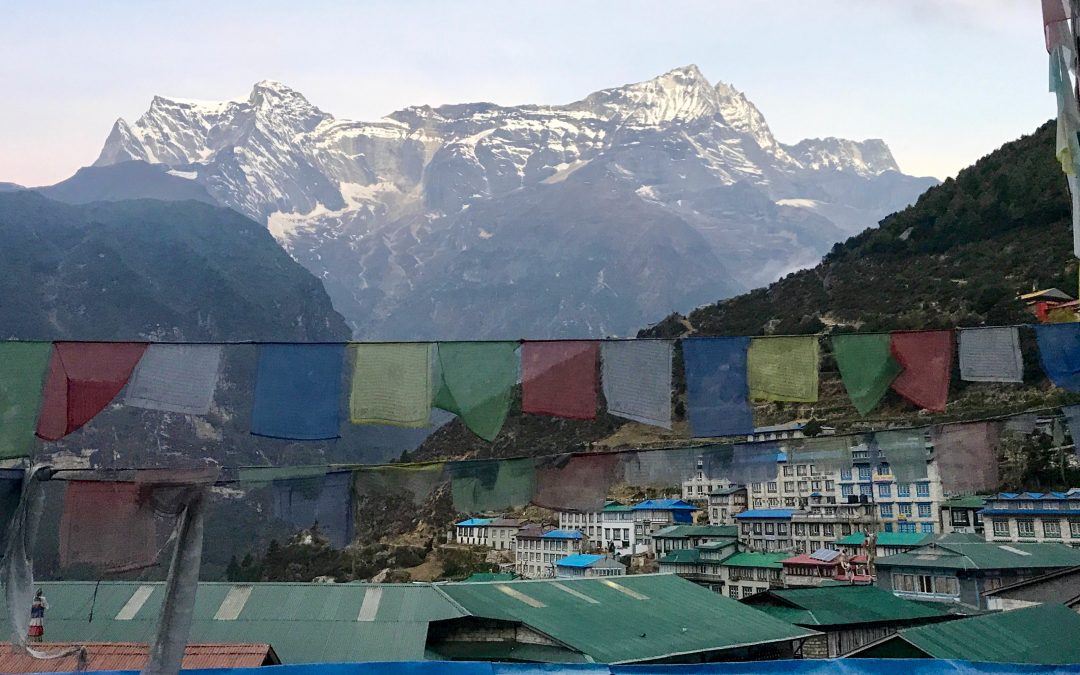 ‘A leap into the unknown’ was an understatement for my May 2017 trek to Everest Base Camp in Nepal. Many firsts in a trip that would change my life forever.

I hadn’t been on a plane for 20 years. The last time I traveled to another country, an engine went out, resulting in an emergency landing. I just preferred traveling by ground. A group of friends, who shared my love for backpacking, and the mountains, invited me to join for a trek to Everest Base Camp. The timing for the trip, and the price-tag, was too perfect to pass up.

So, my first trip to another country, as an adult, kicked off with a 14-hour plane ride. I survived, just as I survived the chaos-filled introduction to Kathmandu. Streets filled with noise and traffic moving in all directions, with little method to the madness other than that ‘avoiding cows’ was a priority, and that ‘honking’ was a common form of communication.

The plane ride to Lukla Airport, the most dangerous airport in the world, was my first time in a smaller passenger plane. The views and experiences, a common theme of this trip, made it all worth it. The plane, would crash a few days later, with lives lost, and leaving us out a plane for our return trip. This led to a fun first helicopter ride, with even better views.

The trek to Everest Base camp would take over a week and was lined with quaint villages, sustainable farms, teahouses, temples, breathtaking mountain views, prayer flags, yaks, and donkeys. There were no vehicles, and all supplies were carried by animals or humans freighting large loads on their heads and backs. The further up we went, the more expensive (and flatter) the beer and soda. It was amazing the accommodations for us tourists, despite the primitive settings. Water was hauled for all uses, and heated through a variety of means to provide hot showers, without electricity. Generators provided electricity at certain times of the day, and the internet was available, for a cost. While these novelties were not always reliable, what was reliable was a steady supply of good food. The vegetarian in me loved the local cuisine, where there were no refrigerators so meat-eating was discouraged.

There were a few acclamation days, on the trek, where we stayed in the same teahouse for two nights, and took day trek’s to higher elevations with magnificent views. The scenery, adorned with color, sustainability, and worship of the great mountains, made it all feel like the most magnificent place. The knowledge of death of someone met earlier on in the trek, the hospitalization warranting altitude-related illnesses of two in our group, and the harshness of the surroundings the higher up we went, was a humbling experience. The highest elevation on the trek was 18,514 feet summit of Kala Patthar, after the visit to the glacier that was home to Everest Base Camp.

The people were so caring, the teahouses so accommodating, and the food was so good. The trek was not too challenging, despite the days, miles, and elevation gains covered over 14 days. We were cared for well by our guide, who had summited Everest, and many other mountains in the area. Our porters, who carried our bags, also joined us for nights of playing cards and listening to music sang and played by members of our group. We got lucky with good weather and clear views of the tallest mountain in the world.

By the end of the trip, I took a four-hour walk through Kathmandu’s busy storefronts, solo, learning to haggle prices and cope with the chaos. I appreciated the conservative dress code. I looked forward to my next opportunity to travel to another country. I was officially hooked and had seen the light in the opportunities a simpler, more minimalistic, lifestyle would afford. I returned home, uprooted my roots, and cut life down to a more travel-friendly existence. I now own a business as a writer, with many more miles and countries under my feet. Such a giant leap from the life I had before Nepal.