A Century’s Worth of History Leaves Treasures in Downtown Wellington 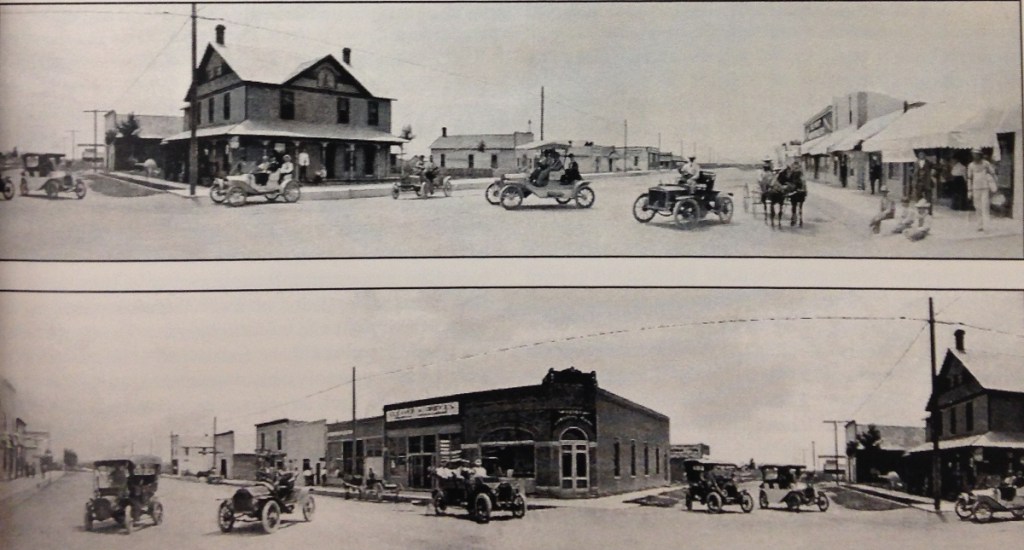 Founded in 1903, downtown Wellington has over a century’s worth of stories to tell. Here are some treasures to seek out and ponder during your next visit.

Wellington’s namesake was Charles L. Wellington. He was the traffic manager for the Colorado & Southern Railway in 1902 when plans began for bringing the railway north of Fort Collins. The land that would become Wellington was used for farming and livestock, thanks to the water supply conveyed to the area by North Poudre Irrigation Company, the landowner since 1901. At the time, the only way to get crops to market was via horse-drawn vehicles and unpaved roads. Beet farming was the biggest of these crops, and the completion of the railroad in October of 1903, allowed the first train to carry sugar beets to the Fort Collins sugar factory.

The railway added convenience that sparked a real estate boom and an increase in agricultural land, leading to Wellington’s founding in 1903. Businesses and homes popped up all around town. Many of these original buildings make up the historic downtown Wellington that we know today. Starting at the intersection of First St. and Cleveland Ave., heading up the south side of Cleveland, and then back along the north side, let us take a look at this history.

The Duncan & Hackleman Blacksmith Shop, built in 1903, is the oldest building still standing downtown. It is the garage looking structure that sits just north of the old Schraders gas station on the residential property along First Street. Also along First St., the Corbin-Black Lumber Company, built in 1904, is the building with the historic train depot mural painted on it. Further down First St., the grain elevator originally called ‘Wellington Mill’ makes for a clever brewery setting. It wasn’t built until 1922 though plans for it started in 1916.

The Cakery building was built in 1910, as a retail store. While we don’t have much information on its history, it is one of the few remaining wood structure business buildings. The rest are homes, and the other business buildings are brick.

The building that houses Wellington Grill was built in 1919 as a drug store with a medical clinic in the back. Prohibition ended in 1933, after which liquor sales and consumption became legal in Wellington, despite Larimer being an otherwise dry county. Liquor sales were not allowed in Fort Collins until 1969, making Wellington a popular destination for drinkers. Many historic business buildings housed liquor stores, bars, and restaurants, the Wellington Grill being one of them.

Papa’s Table, built in 1919, is on the historical registry as the First National Bank building. The bank closed during the 1930’s Great Depression, and the building housed a variety of businesses from food services, motorcycle repair, and flowers. If you look on the patio side of the building, you can see ghost signs from its market days.

In 1905 the building that now houses Soul Squared Brewing Co. was built for a printing company and weekly newspaper. That didn’t last long, but it did serve as a bakery for a few decades before it spent forty-seven years as a lodge hall run by the International Order of Odd Fellows and the Longview Rebekah Lodge. It was used as a VFW post for the decade after that. A panoramic photo on the taproom wall shows the 1909 downtown streetscape. If you look closely, you can see many of the buildings referenced here.

The green house adjacent to restaurants TBar Inn and Sol De Jalisco, currently used by the Town of Wellington, is the oldest house remaining downtown. It was built in 1904 by Dr. William E. Miller for use as a health care clinic. There are several beautiful homes on the east end of Cleveland Ave. built in the same decade. The Victorian home at 3922 was built in 1906, 4003 was built in 1907, and 4009 was built in 1908.

The building that houses Owl Canyon Coffee was built in 1905 as a retail store. It spent many years as a grocery store, cafe, and bar. The bar still resides, but now sees more of the morning crowd in for coffee. The brick building next door to the west wasn’t built until 1922 but started out as a woman-owned retail shop, which it last served as housing Wellington Flowers and More. Most of the years in between, it served as a liquor store and food establishment.

The Wellington Auction Service building, built between 1917-1919, replaced a 1905 structure. Very little has changed about this building, which mostly served as a garage for machine repairs and services until the Smelkers turned it into an auction house in 1985. It used to be called the ‘Lincoln Highway Garage’ due to the short-lived Lincoln Highway route that went through downtown between 1913-1915. It retained the name as Lincoln Highway Garage into the 1950s.

The First National Bank of Wellington was open for business in September of 1905 in the building now owned by North Poudre Irrigation. The owner of the bank built a beautiful Victorian home on the east side of town that now houses Drohmans Salon & Day Spa. A peek in the window at North Poudre Irrigation building reveals a lobby still resembling a bank, though it also served as the Wellington post office for 40 years.

The Hager Harness shop built-in 1909 along Second St. is now the Polished Nail Spa, though you can still see the ghost sign for the Harness shop on the north side of the building.

Portions of the wood building in the back of retail store Thistle were built in 1904 and moved in 1925 to make room for the brick building where Thistle resides. It was originally the Wellington Telephone Exchange, handling all the telephone calls in and out of town until the automated phone service put it out of business in 1940. Many companies and residents have occupied the space since then. When you visit Thistle, ask Kelly about the safe in the floor, that has yet to be cracked.

Next time you find yourself in downtown Wellington, take a look at these buildings and others that make up the familiar downtown streetscape. Imagine what it may have looked like a century ago when the street was dirt and filled with pedestrians, horse-drawn carriages, and very few modern vehicles.

This information was pulled from historical surveys completed by Tatanka Historical Associates through a 2016-2018 Wellington Co Main Streets Program project. The survey results can be found on the Wellington Main Streets website at www.wellingtonmainstreet.org/resources.